MEOWS AND MISTLETOE: A Holiday Anthology one of four great short stories in 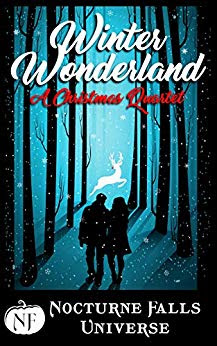 Rekindling love after forty years, falcon-shifter SOLANGE FORD hits the open road with her handsome wolf-shifter CLARK HAYWORTH. Five months later and homesick to return to Nocturne Falls for the holidays, Solange admits she acted on a starry-eyed impulse to take off with Clark. She leaves him in the Florida Keys, alone with his RV and Harley.

Three days before Christmas, Solange receives a chilling call that Clark is seriously injured after a motorcycle wreck. Leaving him was all wrong and she desperately wants to see him, but a fierce blizzard paralyzes all travel out of Nocturne Falls.

Though she hasn’t flown long distances in years, Solange shifts to falcon for the eight-hundred-mile trip to Marathon Key. Thrown off course by an ice storm, exhausted and starving, she lands on a chicken farm guarded by menacing German Shepherds.

With no option but her wits, Solange hatches a plan.
But will it work to get her back to Clark in time?

THE FALCON’S SECOND CHANCE: Book Four in the Falcon-Shifter Series After handing over her Fortune 500 company to her grown sons, widowed falcon-shifter SOLANGE FORD reluctantly turns to a life of baking cookies for her grandchildren and hosting book clubs with her cronies.

Forty years ago, the couple fell in love. On the night they planned to elope, Solange stood him up and Clark never saw her again.

When a hostile takeover bid threatens the Ford company, Solange steps back into the boardroom to fight back. But she needs the help of a top-notch lawyer. At first hesitant, Clark accepts one last challenge.

Long hours strategizing brings them closer together but doesn’t answer the one question Clark had about that night. Why? When Solange reveals the truth she’s hidden all these years, will it be enough to rekindle their magic or has time destroyed any second chance on love?

THE FALCON’S FULL HOUSE: Book Three in the Falcon-Shifter Series Genetics can be cruel. Ask half-elf, IAN HUNTER. As if pointed ears and almond shaped eyes didn’t set him apart, he’s cursed with longevity. Shunned in the elf world, misunderstood by humans, and weary of watching friends age and die around him, he finally found acceptance in Nocturne Falls. Resigned to a solitary life, he never dreamed a woman, elf or human, would choose him as a mate. Until he meets a feisty falcon-shifter.

Wanderlust flows through RACHEL ORTEGA’S blood. Itching to get back on the road, but low on cash, she lands a temporary job in Nocturne Falls. She never expects to fall in love with the town or with a handsome half-elf.

When Rachel’s arrested on an anonymous tip that she’s part of a smuggling ring, her only ally is Ian. He pledges to clear her name, but will a half-elf’s promise be enough to restore her reputation and the town’s trust?

THE FALCON TAMES THE PSYCHIC: Book Two in the Falcon-Shifter Series BRIANNA PUTNAM needs a juicy scandal and fast. Up for a promotion at a high-profile tabloid, she has one month to convince a hard-nosed editor that she has the chops for the job. What could be better than a story exposing Nocturne Falls, a town full of magical supernaturals?  She has the ideal cover. Her grandmother and her cousin are long-time residents, and self-proclaimed psychics. No time like the present to meet the family.

Playboy falcon-shifter CONNOR FORD is filthy rich with nowhere to be and nothing to do. About to give up on finding his life’s purpose, he meets a reluctant psychic, and his passion ignites for the beautiful woman with the strange curiosity about his hometown. When he discovers she’s played everyone for fools, he arranges a surprise to turn the tables on her.

Finally accepting her magical gift, Brianna is overcome by guilt after submitting the story. When her editor arrives to see the town for himself, she has a chance to redeem herself. But will it be too late?

THE FALCON FINDS HIS MATE:  Book One in the Falcon-Shifter Series After her dream job shatters like Humpty’s shell, psychic JESS CALLAHAN returns home to Nocturne Falls to put her life back together and get her career back on track. Left heartbroken years ago by a shifter, she keeps anything or anyone supernatural at arm’s distance; even turning her back on her gift.

His career skyrocketing, RYAN FORD’S life is just where he wants it. When the darkly handsome falcon-shifter realizes that the one thing missing from his quiet, stay-to-himself world is the feisty red-haired psychic, he decides she’d be his perfect mate.

When Jess finally opens her heart to Ryan, she also opens her clairvoyant channel. But will their love survive her catastrophic vision?

And in audio narrated by B. J. Harrison Books one and two in print THE FALCON SHIFTER’S HEART THE PSYCHICS SAY I DO

is one of nine wonderful holiday stories in Cousins BRIANNA PUTNAM and JESS CALLAHAN are headed to the altar to wed the handsome falcon-shifter Ford brothers. But when the brides’ plans run amok, even their psychic powers can’t undo the chaos. The entire town pitches in to help, but will it be enough to pull off their Christmas dream weddings?

books are available from these retailers

My short story “IF IT CAN, IT WILL” appeared in UNLUCKY NUMBER FOUR by T. J. Loveless

Ever thought about skipping work, laying on the couch in your sweats, eating tubes of Girl Scout cookies, and binge watching Outlander Season One till your eyes glazed? Just this once, Bethanne Robidoux, RN, should have listened to that little voice. But nooooo.

Amid the controlled chaos in the ED on July 4th, who shows up?

Well, of course, Murphy, himself!

An excerpt from a short story that appeared in Unlucky Number Four, The Fortune Cookie Diaries, Book Three by T. J. Loveless

BETHANNE ROBIDOUX stood under a shade tree at the bus top, fanning the neckline of her hospital scrubs in hopes that a cubic centimeter of Lake Pontchartrain breeze might take pity and find its way to her skin. An unbearable steamy afternoon, this was shaping up to be a brutal July fourth. The 3D’s—dehydrated, drunk or delirious—would be lined up in the Tulane University emergency department four deep.

Add and save Candace’s Books to your lists!